She’s sitting in the next booth, reading a Jackie Collins book and just generally pissing me off.

Maybe it’s the fluorescent pink hardback she’s holding open so wide that my spine feels like it’s being cracked, too. Maybe it’s the perfect manicure that’s gripping the shiny dust jacket, or the way her Prada eyewear frames her eyes, which flit across the pages in a way that suggests she’s only interested in two or three words of each paragraph.

Or maybe its because my life is nowhere near as perfect as hers, as I can’t just sit and read while Drummer For A Fiona Apple Cover Band Serena serves me endless $5 lattes and High Schooler Just Doing This Because It Looks Good on College Applications Ethan wipes down my table every couple of minutes to get a glance at the surgically perfect cleavage peeping out of my shirt.

Instead I’m here, peering over my laptop screen while Barista Who Foolishly Bought the Bankrupt Co-Owner’s Shares Walter gives me the fisheye for ordering a single small green tea. I learned long ago to take advantage of free hot water refills so I can continue to steep my brought-from-home tea bags. My chewed nails still have last week’s self-applied polish clinging on for dear life, and the last book I read was the owner’s manual to my new, but already outdated, Macbook.

There are only a few words typed out on the glaring white Word page: my name and the date, written like it would appear on a pretentious wedding invitation. “January the Fourteenth, Two-Thousand and Six” takes up more room than “Jan. 14, 2006.”

Now she’s paying her bill with a platinum credit card that catches the light as she holds it out to Serena. She’s probably charging fifty bucks of coffee and milk to her company’s account just because she can and wants the rest of the world to know it. As she clacks out of the restaurant in thousand-dollar shoes, I can only imagine she works for some high-profile PR agency or couture fashion house, which makes me hate her even more.

My editor calls me two minutes after the Jackie Collins reader walks out. He’s pissed because my second chapter is too short, or my first chapter is too long, and I’m not following the plot structure I’m contracted to observe in everything I write for Rose Throne Publishing, Ltd., a decades-old peddler of ripped bodices and oiled pecs. My editor likes balance, and I suppose I can’t blame him. After all, it’s because of him my books get published — and straight to paperbacks sold for pocket change to vacationers and rebellious teenage weirdos about to hide the lurid lasciviousness among ignored copies of Catcher in the Rye.

He also points out, and rightfully so, that I’m almost a week late with the third chapter. The problematic truth is that I didn’t plan on a Chapter Three because I was hoping to move on from this shit job by the time Chapters One and Two ended up on his desk. I was just lucky that a good enough plot presented itself to me for Chapter Two after I found that life would continue like usual after finishing Chapter One.

That’s why I don’t care or blame him for not liking the route the story is taking. This story wasn’t even meant to leave the parking lot.

Another patron walks into the café and orders a macchiato. He’s tall, dark and handsome, and the nightclub stamp fading on the back of his hand on this chilly Wednesday morning tells me all I care to know about his social habits.

He winks at me, and I return the favor by staring back at the glare of an empty Word document.

I’m down to the last tea bag in the box I brought from home, so I ask for a to-go cup as I pack up my laptop and notebooks. I’m too busy shooting a saccharine smile at Walter as he hands me the cardboard cup to notice that my phone’s still on the table.

The Nightclubber doesn’t even try to hide the full-body scan he’s performing with his eyes when he asks me how my day is going. I don’t give him the satisfaction of answering before breaking out into the freezing wind tunnel of Jackson Boulevard.

The beautiful thing about Chicago is that it’s freezing in the winter and sweltering in the summer. There’s no in-between. The most accurate bumper sticker I’ve ever seen says “Chicago’s Four Seasons: Almost Winter, Winter, Still Winter, Construction.”

And I love it.

In the middle of January, it’s impossible to catch a cab. Overhead, the El rushes past. Tourists cover their ears from the sound. It’s really not that bad. Lake Michigan’s up ahead, where the wind makes everything colder. It’s a God-send in July, but a Devil’s advocate in January.

Jackie Collins Reader is visible a block ahead, walking in her fabulous shoes toward Michigan Avenue.

My editor probably tries to call me again, but I can’t answer because I don’t have a phone. I guess he’ll just have to wait, or talk to Busboy With A PhD in South American History Ricardo, whose Spanish, Italian and Portuguese are perfect, but whose English is limited to phrases like “More coffee?” and “Have a nice day.”

Or maybe the Nightclubber has got my phone and is adding every saved female contact with a 312 area code to his list of viable dates. The joke’s on him: Half the women in there are married or over 40, as they’re all my relatives or people at the publishing company.

As I cross the street against the light, I’m not thinking about this because I’m trying not to get killed by oncoming cars. When they honk at me, I trick myself into thinking it’s because I look stellar in my $20 jeans and Nordstrom Rack parka. The slip-on loafers can’t hurt, either.

When I head up to my apartment three stories above a 7-Eleven with a perpetually broken slurpee machine, the red light on my answering machine is blinking. It’s Walter, the angry barista who was pissed about me taking up space and paying the bare minimum for heated tap water and a single bag of dead leaves.

“Hello, this is Walter from Kayama. I’m just calling to let you know that we found your cellphone at the table you occupied this afternoon. Please come by to pick it up by the end of the day. We close at half-past four.”

When I walk into Kayama the next morning, Walter is wearing the same annoyed puckers look he probably had when leaving the message, and I wonder if he went home to his two pugs with that expression on his face. I know I could make it up to him by ordering a $7 double-grande frappucino and $10 ham-and-gruyere tart the size and consistency of a Little Debbie cupcake, but I don’t have that kind of money. Just my phone and a small tea to go, please.

The bell above the door jingles while Walter is begrudgingly filling a cup with hot water. Click-clacking announces the arrival of Jackie Collins’ biggest fan. Today she’s reading Chelsea Handler, as she’s done skimming her read from yesterday.

She orders a $6 cup of Joe this time, and I walk out with my tea clasped in one hand and my phone in the other. Check Kayama off of my hangouts list. I don’t like cafes seeped in animosity and echoing with the heel-clacking of shoes worth more than my rent payment. 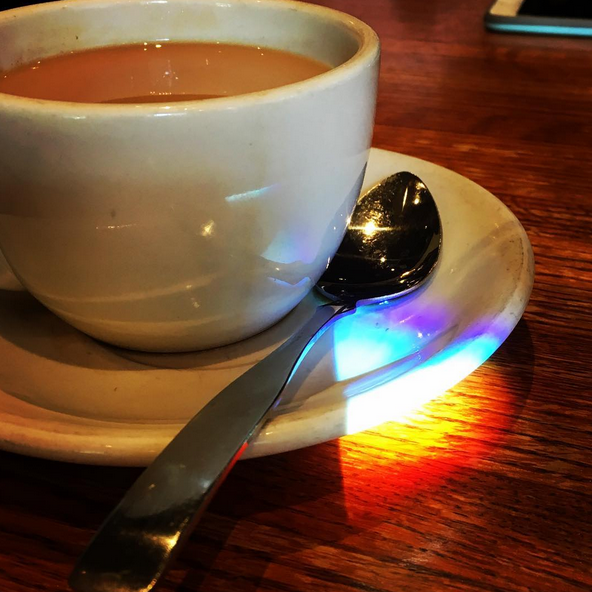 Taken this weekend at Third Coast, an excellent Chicago brunch place that isn’t half-owned by an annoying barista named Walter. If you go, try the stuffed French toast.